Sorry to do another R4DS post, but people really do seek out information about it and this blog has had over 140 hits every day for 4 days because of newbies wanting info. I’m not calling people that come here for info ‘n00bs’ in a bad way, in fact, I’m still a n00b at the R4DS myself, I’ve only had it about a month and even I’ve been asking people and searching on Google for help and info about stuff to do with the R4. You could say that I’m a n00b passing learned experience onto other n00bs, there’s no shame in it, everyone is a n00b at one point. 😉

To start with the awkward one, the SNES emu has to go in the root directory with the cfg file and you create a folder called SNES to put the ROMs in… and it only works with .smc files, not .srm, so if you were looking at playing Sim City or F-Zero, you can’t. It took me a bit of time to realise what the readme meant by putting what where, but I finally got there in the end. The files should look as follows… 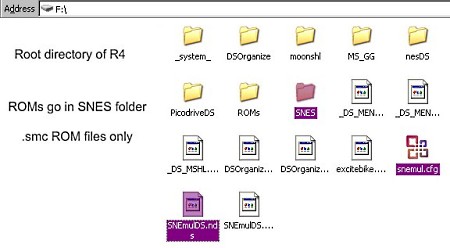 Next is the PicodriveDS Mega Drive/Genesis emu, there doesn’t seem to be sound with this as I don’t think it’s got to that

stage yet, but the graphics work well. The only thing I could say was ‘wrong’ with it is that text can look a little squashed or noticeably resized, but that doesn’t affect the gameplay. You don’t need to put files in different folders, it can all be uploaded in one folder and ROM files don’t need to be converted into anything, the emu will run the ROMs as they are.

The NES emulator used here is called NesterDS and it works quite well, you don’t ‘need’ an emulator on

the DS to run the games, what you need to do is ‘insert’ the emulator to the ROM and upload that. The only problem with that is each ‘ROM’ is around 1MB instead of the xxKB it was originally, so be sure to have plenty of space on your card if you’re going to upload several ROMs.

I’ve only tried Excitebike so far (for the purpose of this blog) and it worked quite well. There were minor graphical glitches and the sound wasn’t so good, but it’s not bad.

Finally, the Master System and Game Gear emulator DSMasterPlus as used here is a decent emu that runs

Master System games quite well, but didn’t run the Game Gear version of Cosmic Spacehead too well. I’m only giving examples on the single games I’ve tried with the emulators, so other games could run a lot better or maybe worse.

Alex Kidd in Miracle World ran well with hardly any glitches (I didn’t notice any worth mentioning) and the ROMs run from the folder you upload the emulator in (or any other folder as you can choose from a menu) without any patching or converting. DSMasterPlus also comes with DLDI (GUI version) for you to run DSMasterPlus.nds through to make sure it runs properly on the R4.

That’s it, I don’t think there’s any more to say as it’s really quite simple and I’ve hopefully given enough information for you to get them working yourself. 🙂

To download the emulators featured here, they’ve been put together in one zip file ready to download.